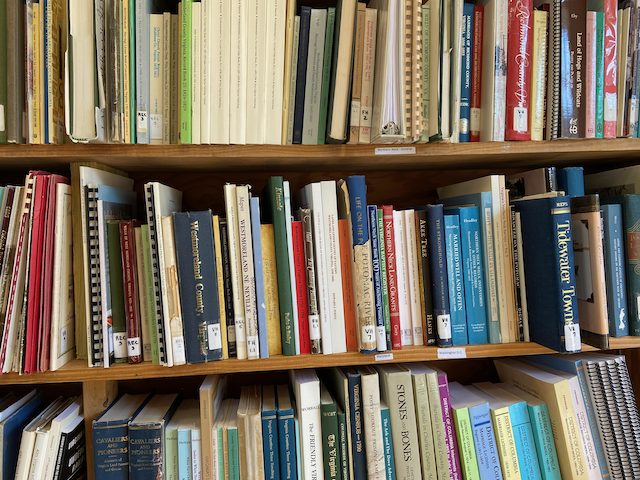 We welcome those interested in researching Westmoreland County local history and genealogy to visit the Henry Hungerford Library and Genealogical Research Center in the Historic Courthouse. Our collections include genealogy materials specific to family history in Westmoreland County, VA, including hanging files and decades of obituaries. We recommend calling or emailing us in advance of your arrival, so that we can gather information relevant to your search in preparation for your visit. Our research librarian can also work with you long distance. Detailed, accurate information provides a better chance of identifying your ancestor. The more information and details we have to help in your search and the knowledge of what you are seeking will help us with the research and ultimately in the final results. While we would like to guarantee the ability to locate requested documentation, it may not be possible. However, every effort shall be made to locate your request.

Download and fill out our research request form here.

We also have numerous binders of local family histories that have been donated to the museum. Thanks to the work of dedicated volunteer Dal Mallory, you can search through WWI and WWII Books of Honor. Categorized alphabetically by last name, the Books of Honor contain photos and information on a majority of veterans from the World Wars who reside(d) in Westmoreland County. All of our research materials are for on site use only. Copies can be made for 25¢ per page for black and white, 50¢ for color.

View our library catalog at: https://www.librarything.com/catalog/WCMuseum.

The Bulletin of the Northumberland County Historical Society
Assorted Vols. 3-47 (1966-2010)

We have a variety of local yearbooks dating back to the 1930s including The Oak Leaf, The Rebels, The Generals, The Kernal, and Washington and Lee High School

We have a micofilm reader available for use, and the following collections.

History of the Henry Hungerford Library

Shorly after the war between the federal and confederate states, Miss Mary Elizbabeth Hungerford, along with her father, Major Henry Hungerford, and her sister, Miss Amanda, left Washington and returned to their home in Westmoreland county. They took up their abode at Montross, the county seat. While living in Montross, they found relatives, connections, and many friends. For these, Miss Mary Elizabeth formed a warm and lasting attachment to the community, spending much of her time before her death in Montross. Not so many years before her death, Miss Mary Elizabeth succeeded in getting together a very valuable collection of books. Members of the Hungerford Family, her immediate relatives, and her numerous friends, aided in this. The collection in hand, her next thought was where to find a home for the library. Knowing that Miss S.E. Harvey and sister had a little buisness establishment in the village of Montross, she wrote to Miss A.Y. Harvey telling about this collection of books and asking if she and her sisters would house it at their establishment, and attend to it. She at this writing, asked Miss Harvey to name the library. Knowing the great affection Miss Mary Elizabeth possessed for her father, Miss Harvey could think of none other, better, or more appropriate name for the library than her father’s name which was Henry Hungerford. Miss Harvey and her sisters agreed to take charge of the library.

Miss Mary Elizabeth gave the collection of books as a nucleaus for the library, hoping it would be added to from time to time and become a lasting benefit to the community. She gave this generous gift, in appreciation of the great kindness shown to her father, sister, and self, at this trying time, so soon after the Civil War. For a few years, it was attended to by Misses S.E., L.G., and A.Y. Harvey. Books were received repeatedly from Miss Mary Elizabeth as long as she lived, also from members of her family, especially Miss Anne W. Wilson. Other friends also contributed. Miss Ella Bernard, of New York, was a liberal contributor and at her death, left to the Henry Hungerford Library, “Back in her old home town” a nice sum of money to keep it running.

On being moved from the Harvey establishment, the Henry Hungerford Library found its next home in a nice little building formerly used as a post office, situated in the front corner of Mrs. W.E. Goodridge’s yard. In passing from the care of the Misses Harvey, the “Ladies Aid” of St. James P E Church became its custodian with the hearty consent of Miss Mary Elizabeth. Miss Jane Hammer, a member of the Aid, served as the librarian. After a short while, the library was moved to an upper room in the People’s Bank building. When Miss Hammer left Montross, Miss L.G. Harvey attended to the library for a short while. When she no longer attended to it, the older girls of St. James Sunday School cared for it. Later, when the Montross High School wished to be placed on the accredited list, it had no library, which is one of the requirements was accreditation. Being asked by the school board for use of this library temporarily, the Ladies Aid agreed to lend it to them, for a short time, provided it was well cared for. At the suggestion of Mrs. A.E. Carver and Mr. C.H. Tall, Jr., the principal of the Montross Agricultural School, the Community League placed $1,000 insurance on the Henry Hungerford Library. The School Board of Westmoreland County placed an additional $1,000 insurance on the Library.

The Library remained at the school until the summer of 1930, when, with the building, it was destroyed by fire. Pictures of Henry Hungerford, a silouette of Miss Mary Elizabeth, book cases, and books were all destroyed. This library contained many old and priceless books, books that could not be replaced. Fortunatley, however, there was the $2,000 insurance, and with this money the Henry Hungerford Library was reestablished, and located in the new brick building of the Montross Agricultural School. Through the will of Miss Ella J. Barnard, the Library was bequeathed money for the purchase of books and to pay a librarian. The following trustees were appointed by the Court to oversee the monies: F.F. Chandler, Albert Stuart, R.H. Harris, Mrs. Kate H. Mason, and Mrs. Alice R. Carver. Mr. Wingo, the principal for the High School, worked with a committee appointed by the Communituy League to select books to purchase.

Up to the writing of the meeting minutes on September 26, 1934, Mr. Wingo was still overseeing book selections. Mr. Chandler, Chairman, had called this meeting to go over the affairs of the Library, and make plans for the future. Mrs. Carver was elected secretary, and the offices of secretary and treasurer combined. Plans for establishing the main library near the Court House and having a building built for this purpose were discussed at this meeting.

After a gap in the records, in 1937, plans for re-establishing the Library and a building for the same were discussed at a Trustees meeting. It was at this meeting on March 17, 1937, that a motion was carried accepting an offer by Mrs. Harriet Greer Littlefield, who had offered to give give an acre of her ground in Montross for a library building. Mrs. Littlefield had first offered this land in 1935 in memorial to her aunt, Mrs. Ida Greer Goodridge, and her husband Mr. John Goodridge. In July 1937, Mrs. May W. Hutt shared that the library could temporarily be located in the Robertson Store Building, which was being used for a W.P.A. sewing room upstairs, and the Woman’s Exchange downstairs. Mrs. Hutt said the library could be situated in the downstairs, and also said that W.P.A. funds could be used for a librarian. 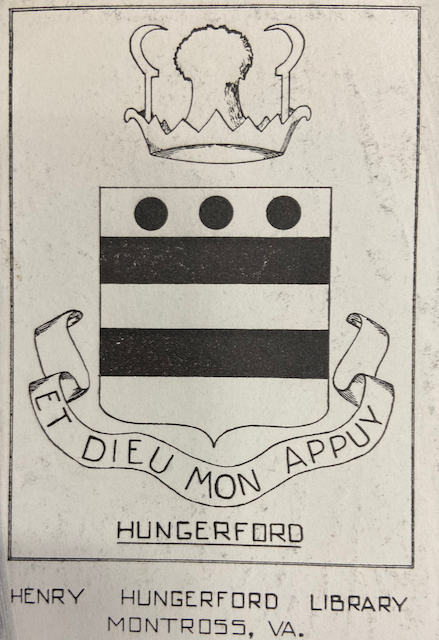